While it may have been quiet here on the blog, life over the last few weeks has been anything but with family visits, trips away (more on those to come) and an unusually busy period at work. As such, I’ve been desperately squeezing in little bursts in the garden as life, and our peculiar weather, has been letting me. However, it’s been a glorious long weekend of getting out in the sun and getting things tidied up and it’s about time I shared my lovely new veg plot with the world! 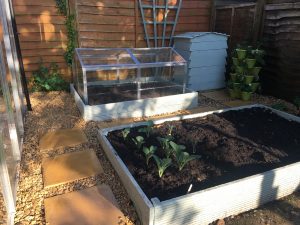 This little corner has come a long way, and I’ve learnt lots about both the garden, and basic woodwork, as I’ve put it together. The initial idea for making a veg plot at the back of the garden came from deciding what to do with a large laurel root that is in the back corner. The laurel was a tall monstrosity when I moved in, having been left to its own devices for far too long, and over a number of visits dad had tackled taking it out. Initially I’d planned to dig the root out, but despite having hacked at its side roots, it became clear that it was not for moving. A search for solutions online threw up a number of options, but all would take time and in the interim I wasn’t keen on it just sitting there exposed, so the compost bin was the first bit of planning for the corner. That way the root can quietly decompose over time and the space is not wasted while I wait.

The initial idea for the bee hive shape compost bin I’m sure was sewn years ago while living at home as my parents planned their own  kitchen garden and a quick google search revealed lots of images and some complex plans for similar styled bins for those, like me, without the luxury of a garden large enough to have compost bins out of sight and so requiring something a little more attractive than a black plastic bin. From that idea the rest of the planning for the raised beds grew. 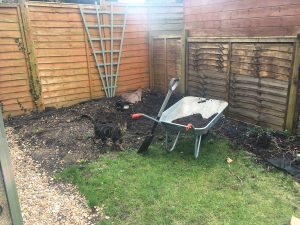 Step one was clearing the area and levelling it as best as I could. My garden is on a slope, so this meant quite a bit of displaced soil, which has been piled up for the last few months until this weekend as it’s been too wet to sift and sort. While I had a lot of help on this project from J, I’m pretty pleased to say that I shouldered the heavy lifting at this stage, and that pile has been hauled by my own fair hand (safe to say after muscles I didn’t even know I had ached but there was real satisfaction in it)! 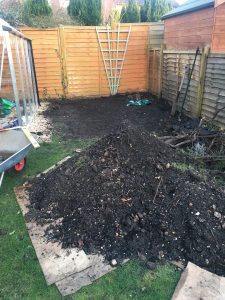 The initial momentum took a bit of a nose dive as the cold weather hit and the snow fell. While I did manage to get the first of the beds assembled before the worst of the weather hit, it did slow the process considerably, as did the rain that followed. 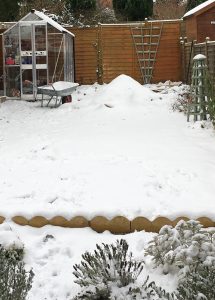 As I finished up laying the gravel today in glorious sunshine, it was hard to imagine driving in posts for the beds in between snow flurries only a few weeks ago, so unusual has our spring been and I’m hoping that this lovely warm spell we’re enjoying is here to stay!

I’ll spare you a blow by blow of the assembly process and give you the headlines. I used decking boards for all the assembly, save the roof of the compost bin which is feathered fencing panels to get the overlap. This was partly to do with cost, as they were on offer and worked out cheaper than the other treated timber, but I also like the look of the ridges in each panel. The assembly varied for each bed. For the first, I opted to drive the posts in first and then screw the panels on, as it would be seen from the house and I wanted to make sure it would be level and square to the greenhouse and the fence. For the second bed behind, we assembled it first and then drove the posts in at each corner. It is the smaller of the beds and this seemed to work pretty well but if I were doing it again I’d saw a point on each post rather than driving them in square. I opted to use screws for the assembly as I thought it would lead to a sturdier finish than nails and it seems to have done. Inside each bed, we screwed a thin panel of wood to seal up the join and further strengthen the boards. I then painted them to protect them, but also to add a little colour. I used Cuprinol garden shades in a colour called Fresh Rosemary, which is a pale green. The paint claims to be safe for wood which pets may come into contact with or chew, so seemed safe enough for my veggies too.

The compost bin was mostly off cuts from the beds. It didn’t quite go to plan, it’s not sectional like many of those online are as it was cut by hand in the garden and the precision needed for the angular joins were beyond my skill set but I’m pleased with the end result.

The last stages were done today. I laid the slabs and gravel and J did the heavy graft on seiving through the remaining pile of soil, restoring the flowerbed it has been mounded on for the last month to its former glory. (There’s more on how we tackled the endless stones to come in a later post as I’ve made some progress since the little plastic sieve I used for the first beds I tackled when I moved in last year). 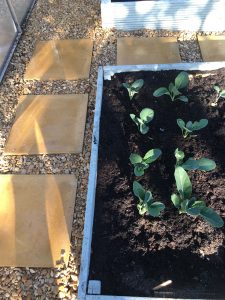 I opted for gravel around individual slabs for a few reasons. The first was practical, the garden is on a slope and a fully paved surface would have been impossible to level with the scale of concrete we kept finding below the surface of the soil and so gravel seemed the best option to hide the uneven sections. However, I also needed something flat to step on so I could access the beds easily as I’m often barefoot and if the beds were to be accessible for a little lettuce while making dinner, gravel alone wouldn’t suffice. I also didn’t like the idea of kneeling in gravel to work on the beds, even with a mat.  I’m pleased with the overall look, the yellow stone looks nice and bright against the painted beds – especially when wet (good tip dad!).

A final step was to set up the water butt behind the greenhouse so my little veg garden has its own handy supply of rain water and then to liberally water the whole garden before a BBQ to celebrate the end of this little project!

I’ll leave you with a final picture of Tilly enjoying this weekends’s weather, since Tabitha made an appearance above. I hope you’ve enjoyed the long weekend and the sun as much as they, and I, have! X 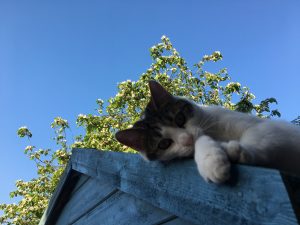